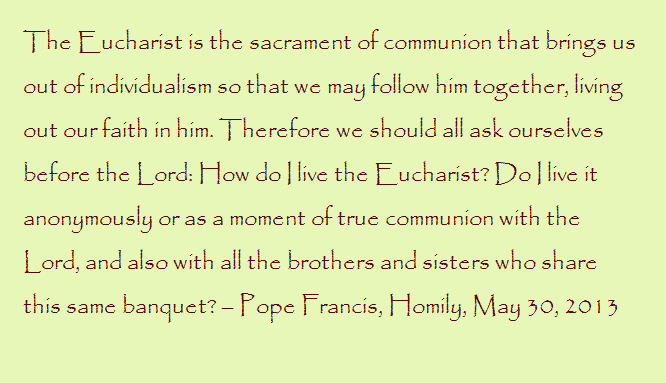 Quotes – Praying It –  Basking In It – Digging Deeper – Making It Real

We Need Each Other and We Need God!

One thing that I think we are too timid about in our culture today is admitting our weaknesses, limitations, and struggles to others. Many times I have found that when I’m brave enough to share a problem with a friend it turns out that it’s something they needed to talk about.

Allow Yourself to be Helped

If God had intended us for total independence, he would have given everyone a complete set of gifts for handling all aspects of life, and not made us particularly in need of help at the beginning and end of life. Nor would he bring special people into our world who, through their very weakness and dependence upon us, are here to teach us how to love unconditionally and that there are bigger things in life than power, money and independence.

Charity doesn’t always involve just giving, but sometimes also receiving. Accepting help isn’t something to be avoided or survived, but it is an act of charity, both because we should receive as well as give with love and want to foster a culture of charity and healthy inter-dependence in our communities.

Not Everyone has the Same Gifts

I distribute the virtues quite diversely; I do not give all of them to each person, but some to one, some to others… I shall give principally charity to one; justice to another; humility to this one, a living faith to that one… And so I have given many gifts and graces, both spiritual and temporal, with such diversity that I have not given everything to one single person, so that you may be constrained to practice charity towards one another… I have willed that one should need another and that all should be my ministers in distributing the graces and gifts they have received from me. – The Catechism of the Catholic Church #1937, quoting the Dialogue of Jesus to St. Catherine of Siena

The true meaning of humility:

We are the creature. God is the creator. We are not God!!!

Even Jesus humbled himself in coming to earth as a man, making himself a creature. He made himself completely vulnerable to poverty, lowliness, ridicule, torture and death. If he humbled himself this much, certainly it is something that we should strive for.

Christ’s example of extreme humility makes it ludicrous for us to think ourselves too good or noble or sophisticated or whatever to reach out to others and meet them where they are.

Rather, he emptied himself, taking the form of a slave, coming in human likeness; and found human in appearance, he humbled himself, becoming obedient to death, even death on a cross. Because of this, God greatly exalted him and bestowed on him the name that is above every name, that at the name of Jesus every knee should bend, of those in heaven and on earth and under the earth, and every tongue confess that Jesus Christ is Lord, to the glory of God the Father.

It’s Not All Up to You

It is a very dangerous thing to think that’s it’s all up to you to make the world a better place. Not only is it a grim and overwhelming concept, but it’s an entirely unhealthy mix of pride and despair. People who think this way can either tie themselves in knots, leaving them incapable of love and life, or resort to something desperate and awful, such as those who have murdered abortionists. Not only do they snatch away from the abortionist the opportunity to repent and convert AND play God in deciding when the abortionist should meet his maker, but they do incalculable harm to the cause of Life in so many ways. Despair is a very powerful tool of the devil. If you are without hope in this sort of way, you need to find help.

I have a hard time understanding sometimes why it’s so hard for me to say “no”, even when I really should. Not so much the big “no”s involving huge moral choices, but mostly all the little “no”s involving how the kids spend their time and how to balance family life with outside obligations and things like that.  It’s partly my phlegmatic personality, but I think it’s partly the pressures of the culture.