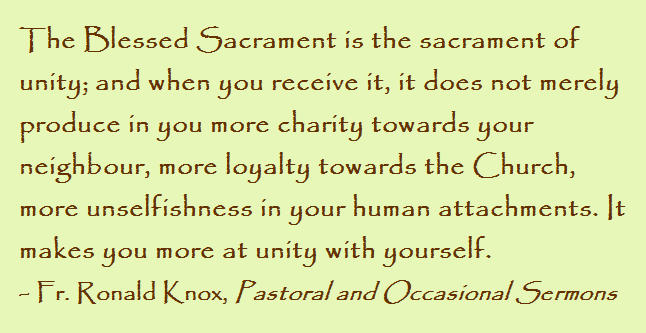 Quotes – Praying It – Basking In It – Digging Deeper – Making It Real

The Virtue Lies in the Mean:

We don’t become virtuous only through the intellect, because we need Christ! But, we do use our intellect to understand what direction we ought to be heading in and to sort out our various options in making a particular choice, and even in working to be people who make good choices. What we believe is that the virtue can be found in the balancing point between two extremes.

Unfortunately this concept has been sadly skewed by our culture’s current view of the political spectrum, which considers the extremes to be “conservative” or “right” and “liberal” or “left”, with the “moderate” position in the middle. This is an unhelpful spectrum in many ways, and should at least be put aside for the present discussion.

Mean: In general, that which is in between others. It may be the “mean term” in a comparison, or the intermediate between two extremes. In moral behavior it is the moderate and reasonable way of acting, without failing by excess or defect, as courage is the mean between rashness and cowardice. It is therefore the mean of moral virtue, which does the right thing in the right way, in the right measure at the right time and place and by the right person. – Modern Catholic Dictionary by Fr. John Hardon, SJ

The virtue of truth gives another his just due. Truthfulness keeps to the just mean between what ought to be expressed and what ought to be kept secret: it entails honesty and discretion. – Catechism of the Catholic Church #2469

The concept was first explained by Aristotle in the Nichomachean Ethics and incorporated into Catholic teaching by St. Thomas Aquinas. Here are a few examples.

Be Wary of Reacting to the Culture:

Don’t let evil define who you are! Reacting to the culture poses the grave danger of participating in (and continuing the cycle of) the pendulum problem.

For example, if you find a problem with parents in your neighborhood who are too lax in their discipline, it doesn’t help to react by becoming an extreme disciplinarian. Not only is it bad for you and your family, but it also can contribute to others taking an even more extreme position as they try to distance themselves from your opposite extreme.

You may reasonably be the strictest parent on the block, but you don’t want to base your parenting methods primarily on your frustrations with how other parents are acting. It’s bad for everybody.

Another example to consider is modesty. It is fair to acknowledge that there is a problem with modesty in our culture. The right way to deal with this is to give our children a healthy sense of what it means to be a person, how we ought to respect the dignity of others and how to live the virtue of modesty in a good, balanced way. We do this through example and through thoughtful conversations on the topic as well as how we choose clothes with our children. The wrong way would be to focus just on the clothing and insist on wearing things that are as far to the opposite extreme of the cultural problems as we see them. This doesn’t provide our children with tools for dealing with the challenges of the culture and it doesn’t inspire others by providing a healthy witness to the way of the Gospel. Instead, it is likely to turn people off to the virtue of modesty because it helps them to associate it with an extreme position.

Living a balanced life requires not only an intellectual strategy for finding the balanced position, but also a life that is rooted in Christ with more than just a superficial understanding of the virtues. The Catechism of the Catholic Church is an amazing source of perspective for living the virtues in a wholesome and truly Catholic way. Here is one example:

2521 Purity requires modesty, an integral part of temperance. Modesty protects the intimate center of the person. It means refusing to unveil what should remain hidden. It is ordered to chastity to whose sensitivity it bears witness. It guides how one looks at others and behaves toward them in conformity with the dignity of persons and their solidarity.

2522 Modesty protects the mystery of persons and their love. It encourages patience and moderation in loving relationships; it requires that the conditions for the definitive giving and commitment of man and woman to one another be fulfilled. Modesty is decency. It inspires one’s choice of clothing. It keeps silence or reserve where there is evident risk of unhealthy curiosity. It is discreet.

2523 There is a modesty of the feelings as well as of the body. It protests, for example, against the voyeuristic exploration of the human body in certain advertisements, or against the solicitations of certain media that go too far in the exhibition of intimate things. Modesty inspires a way of life which makes it possible to resist the allurements of fashion and the pressures of prevailing ideologies.

2524 The forms taken by modesty vary from one culture to another. Everywhere, however, modesty exists as an institution of the spiritual dignity proper to man. It is born with the awakening consciousness of being a subject. Teaching modesty to children and adolescents means awakening in them respect for the human person.

Balance in Politics and Culture:

Great evil is not a good excuse for ignoring other evils (or snubbing those who focus on fighting them). Often we exacerbate the problem by doing this. For example, if we drop our duty to help the poor because we are more concerned about abortion, we may end up fighting abortion less effectively, since poverty is one of the factors that contributes to abortion.

Both major political parties in the United States are a mixture of good and bad (as are all political candidates, of course). We need to be aware of the faults and weaknesses of “our side” and be willing to challenge ourselves and others on those points as well as supporting the good parts.

One way people fail in the area of balance is to assume that the two extreme options in a particular matter are the only choices available. For example, many modern thinkers believe that you can either have faith and reject science (some variation on a fundamentalist ideology) or embrace science and reject faith. It can be very difficult for them to see that the best answer is to embrace both faith and science, and to understand how they work together. We know about God through faith, partly because we believe what he has revealed to us (primarily through Scripture and Tradition). We also know about God through His great works of Creation, many of which surround us in everyday life. Science can help us better understand Him through His works

Science can purify religion from error and superstition. Religion can purify science from idolatry and false absolutes. – St. John Paul the Great